It appears that a Devonian villager has decided to get straight to the nub of the Road Safety issue with some paint and a wall of his house.

A man has painted a 30mph sign the height of a double decker bus on the side of his house in a Devon village.

Tim Backhouse, who moved to Bow two years ago, said he hoped the 15ft (4.5m) sign would slow traffic.

He said speeding traffic on the A3072 made it difficult to cross the road to get to the village shop.

Devon County Council said its own tests revealed most drivers kept to the 30mph (48km/h) limit but it was aware of residents’ concerns.

“Bow has a shop 300 yards (274m) outside the village perimeter which a lot of pedestrians walk to,” Mr Backhouse said.

“There’s no safe crossing point, the pavement runs out near a corner and it would be just about OK if vehicles did do 30mph, but they don’t.

“Since we moved to the village two years ago, we’ve witnessed a few instances where people have almost been hit by vehicles.”

He said he wanted a pedestrian crossing to be installed in the village.

Stuart Hussey, who also lives in Bow, said most traffic “and especially the lorries” did not keep to the 30mph limit.

The county council said it had built a footpath to the shop, which Mr Backhouse said residents were grateful for.

The council also said its speed checks recorded an average speed of 27.2mph in the 30mph zone.

A spokesman said: “We’re aware of concerns about the speed of traffic through the village, and local police have worked with the community on enforcement issues.”

Mr Backhouse said he painted the sign as part of Road Safety Week UK and would paint over it on 5 December.”

Marvellous stuff. To me personally, it speaks volumes of current road safety policy and street design where people feel compelled to do stuff like this.

Apparently, Mr Blackhouse will be getting the paint and brushes out again for a ‘National Dog Fouling Awareness Week’ sign after noticing an above average amount on the pavements in the village. Oh, alright, I might have made that last bit up. 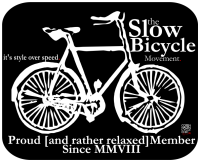